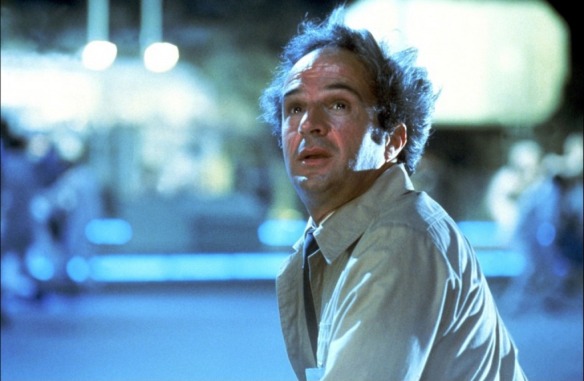 [Following his appearance as French scientist and UFO-researcher Claude Lacombe in Close Encounters of the Third Kind, François Truffaut, more famous for his work behind the camera on his own films (though Spielberg cast him because he loved the way Truffaut had acted alongside children in L’enfant sauvage [1970]), received this letter from his friend, the great director Jean Renoir.]

We have finally seen Close Encounters. It is a very good film, and I regret it was not made in France. This type of popular science would be most appropriate for the compatriots of Jules Verne and Méliès. Both men were Montgolfier‘s rightful heirs. You are excellent in it, because you’re not quite real. There is more than a grain of eccentricity in this adventure. The author is a poet. In the South of France one would say he is a bit fada. He brings to mind the exact meaning of this word in Provence: the village fada is the one possessed by the fairies.
These fairies who reside with you have agreed to let themselves be briefly borrowed by the author of the film in question.
Love from Dido and I.

Postscript: While Renoir’s letter was on its way to France, Truffaut’s own letter, written the same day, must have been in the post to Renoir in Beverly Hills. Here’s an extract:

I appeared on a television show about Close Encounters of the Third Kind, and the last thing I spoke about was Le Coeur à l’aise [Renoir’s 1978 memoir], showing the book itself on camera. In my enthusiasm, however, I didn’t notice that I was holding the book upside down, so millions of viewers had to bend over and look at the TV screen upside-down to be able to read the title. I don’t have to tell you that my daughters were on the floor laughing about this.
[…]
I think of you constantly and send you all my love and affection.
François

2 thoughts on “The Spielberg Hundred #002: A Letter from Jean Renoir”