Chantal Akerman’s News from Home sounds like a simple proposition. It consists of Akerman herself reading aloud from the letters sent to her by her mother when the director first moved to New York from Belgium. There are gaps in the soundtrack where you might expect to find Akerman’s replies, but we never hear her responses. The first presumption that you might make is that the film stands in for the director’s letters to her mother, filling those gaps with a visual summary of her new life in the USA. But it’s not that simple. Instead of a bi-directional transmission of information between mother and daughter, or even a one-way set-up where mother calls and receives no answer, we get a complex intertwining of their roles as speaker or auditor, presence or absence.

The most important way in which News from Home complicates its sense of presence/absence is through the disjunctures between sound and image. There are three intertwining tracks to follow here, the image track, the diegetic soundtrack and the voice-over narration. Their interactions and entanglements provide one way through which the film’s central themes can be located:

The image track gives almost exclusively fixed-camera perspectives, usually into a distant vanishing point, with occasional tracking shots from road vehicles or the overhead railway. Movement is always lateral – despite occasional glimpses of Manhattan’s famous canyons and skyscrapers, the camera never looks up, never simulates the overwhelming fact of verticality that greets a walker through the streets of New York. If you were expecting these shots to be loaded with narrative information, you’ll be disappointed, but the film quickly acclimatises the viewer to its aesthetic template, which offers only minor variation throughout. Only occasionally is there an explicit compositional connection between shots, as when there is a graphic match between two shots that represent a temporal ellipsis, switching instantly, even arbritrarily from day to night.

The final shot is taken from a ferry that pulls away from Manhattan island, giving the only “overview” of New York, though its revelatory power is undercut somewhat by the mist that shrouds the city. The camera turns until its film runs out. Sometimes the camera seems disconnected, unnoticed, refusing to editorialise the scene in front of it. Other times, such as on the subway train, it is hypersituated: its presence is felt, people react to it, regard it with suspicion or bemusement.

The diegetic soundtrack provides the ambient noise that accompanies the image and concretises it with its customary sounds of traffic, subway trains, the ambience of busy streets. At first this seems to be a simple case of direct sound recorded along with the image track and paired up with the pictures to enhance the sense of the camera being situated at the scene. But you soon notice that the sounds don’t always sync up with the images. You’ll notice when you see cars go by, you might not hear the same cars going by, even if you are listening to traffic sounds. This is most pronounced in those shots towards the end when the camera looks out of a car window. The sound seems to be a recording of similar streets, but from a fixed position rather than one that is moving. The depth cues given by the soundtrack are also misleading – the conversations of people who are passing very close to the camera are indistinct or completely muted, and even where the image and sound are at their most precisely synchronised, the sound seems to have been recorded from a position far from the camera. This has the effect of enhancing the sense of dislocation, undermining the camera’s presence at the scene by tugging the notion of situatedness in two different directions: you don’t hear the city from the same location as the one from which you see it.

The voice-over narration obviously sounds as if it was recorded separately, away from the image and dubbed over it. It traverses several shots in each letter. Occasionally, the noise of the city overpowers and muffles the text of the letters, and in the final shot, the voice-over fades away as the ferry moves out to sea. Mother’s letters provide information on family and friends, her own faltering health and emotional anxieties, and are filled, poignantly, with requests for reciprocal news, information and photographs: she wants to see her daughter, to have some image that might confirm her presence, however distant. The images we see in the film may be an attempt at replying, but suggest that Akerman cannot or will not reduce her “news” to a series of salient facts: hence the images of alienation and distanciation that represent her report on her time in New York. She fails to act upon her mother’s requests for closeness, maintaining a diffident separation and independence, either deliberately or carelessly; we don’t have enough information to say which.

The interactions between these three tracks, which come together and move apart periodically provide the core of the film’s thesis on dislocation, a perfectly cohesive structure that gains power through repetition rather than accretion of details or cues to escalating emotions. It could just be the case that Akerman is trying to simulate the effect of being a new arrival in a big city, the feeling of being present but not yet fitting in, being seen but not directly addressed. In that explanation, mother’s letters with their emotional appeals fading out of perceptibility, read in a disaffected manner, appear to simulate the effect of separation from the original home – the reports arrive but their emotive power is depleted by distance. Alison Butler phrases this nicely, summing up the eloquence of Akerman’s use of form over narrative to articulate her central themes:

An exilic structure of feeling is created by the transmutation of alienation, absence and distance into formal principles: the film maintains a rigorous separation between the personal off-screen space which anchors point of view and voice, and the public space on-screen, which is observed with detached curiosity.

I wouldn’t want to suggest that News from Home “simulates” alienation rather than formalises its effects, however. Alienation, in the form of a calm detachment, may be one of the affective states incited by the film, but it also builds up a critique of the very possibility of direct, autobiographical communication. Ivone Margulies analyses the film it terms of the way it plays with questions of identity, refusing the conventional codes of autobiography and authorship, through its rebalancing of the elements of text and speech. This hinges on her construction of a filmic mode of “epistolary performance”, with the forms of letter-writing and reception at its centre:

Like other autobiographical texts, letters involve a continuous commerce between textual and extratextual data. The border between text and reality is figured, in the letter, as the real identities of writer and of addressee. Moreover, the letter’s seemingly unproblematic transit between different orders of information and of verifiability creates the ‘effect of the real’ mentioned by Barthes: unexpected shifts in address – direct and indirect speech, confessions and reports – result in a rhetoric of authentication. Letters stand midway between speech and writing, contact and distance. They design what desire – and, moreover, what desire for communication – can mean.: the letter writer can only establish contact with the addressee through the dynamic of a fissured, forever faulty text. […] News from Home is a singular example of the skewed self-presentation. The backbone of its soundtrack is found material, a series of letters to Akerman from her mother; the way Akerman makes this writing her own – listening to it, loving it, overriding it – may stand as the model for verbal communication in her films.

Margulies suggests that Akerman blurs the boundaries between addresser and addressee by voicing her mother’s words and repositioning the sites of enunciation:

Reports from Belgium – mundane bits and pieces, family gossip, the mother’s moods – are relentlessly revoiced at the site and time of reading, mapping a restricted personal history. Thus the letter collapses the dual temporality of autobiographical writing – a necessarily belated report on one’s experience of an earlier moment. […] To voice her mother’s complaint becomes her response to the complaint – her mother’s writing becomes hers, and with a vengeance.

This disavowal of the authorial identity of both women rests upon the three-track formal structure I listed above:

The alienation between image and sound parallels the disjunction between the mother’s space of letter writing and Akerman’s space of performance – between the foreign reality and New York. Intermittently muffled by the sound of the city, the intimacy and warmth of the text claim closeness but spell distance.

Whatever the nuances of the identity debate proferred by News from Home, doubtless bound up in the particularities of the New York art scene and the focus on problematised or foregrounded conceptions of authorship, its great achievement is in presenting the complexities of that debate through a formal framework of overlapping voices and perspectives which are never allowed to be fully present, fully situated on their own. Thus, the result is not an intellectual tract, but an emotional experience that permits the spectator a sympathetic sensation of dislocation: like the mother and daughter, the viewer is similarly prevented from taking up a continuous position as a third-party addressee. It is not just mother’s news that gets drowned out (Akerman presumably keeps reading even when the traffic overpowers her voice), but our access to it. The mismatch between soundtrack and image track prevents us from feeling securely situated, from letting the camera be our simple proxy within the diegetic space. 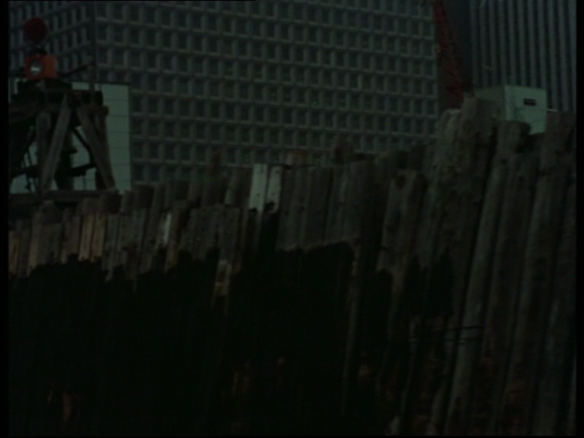 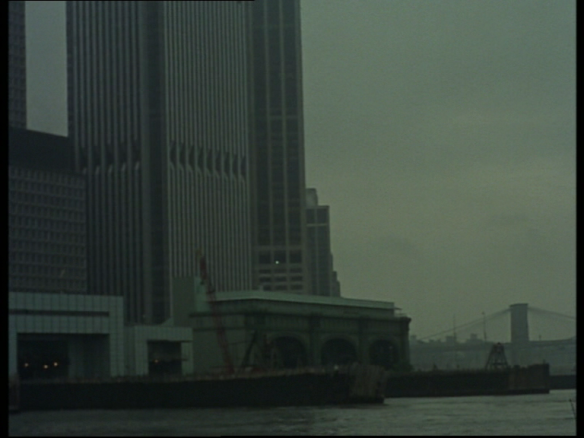 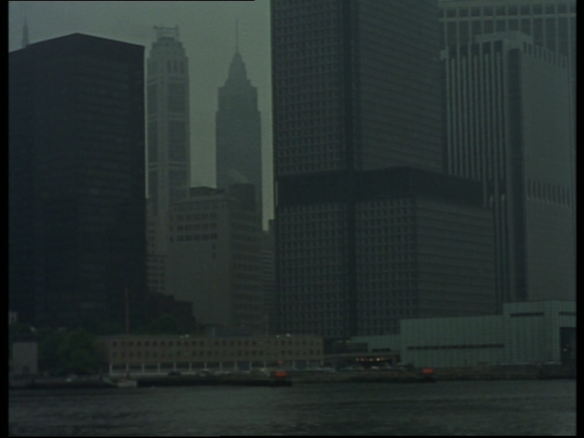 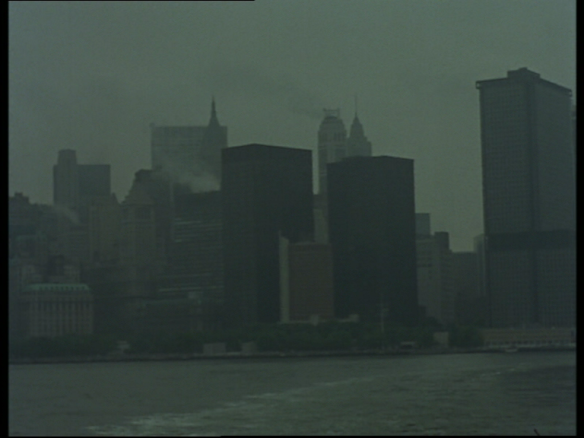 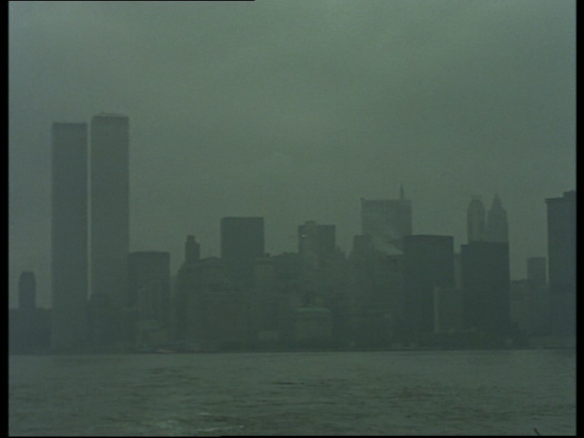 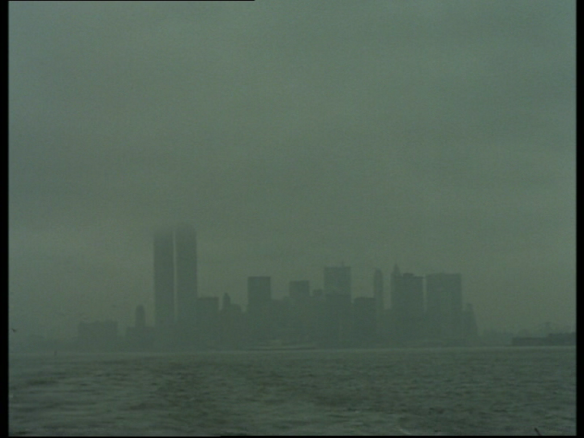 What then, to make of the final shot, where sound and image meet (I’m not sure that they were recorded together, but they certainly seem to be in sync), the voice-over fades out (instead of being cancelled out by something louder), and the shot develops slowly into a summative portrait of Manhattan’s skyline? It is not an editorial act that decides when this shot will end, but the exhaustion of the camera’s raw material, perhaps the most emphatic denial of authorial mediation, asserting instead the mechanical properties of the cinematic apparatus itself. It’s a stunning moment, a soothing moment that, I might argue, shows up the uneasy disconnect of the rest of the film by offering up a transcendent act of embodiment. Even as it might be a powerful evocation of isolation, in the keenly felt duration, and the measurable, accumulating depiction of distance and proportionately widening perspective, there is almost perfect clarity. As the viewer, you suddenly know where you stand. What you feel and think while you stand there is another matter.

6 thoughts on ““Why don’t you send us a photo?”: Chantal Akerman’s News from Home”