The films of Yasujiro Ozu are probably the opposite of random in their structure and composition, so it seems rather perverse to make one his films the subject of this ongoing series of randomised film reviews. But that’s not a good enough reason to avoid giving it a try, this time working with Ozu’s gorgeous 1959 Floating Weeds, a remake of his own 1934 silent comedy-drama. It’s also a good opportunity to sing the praises of Eureka’s magnificent Blu-Ray edition of the film, from the Masters of Cinema series (though today’s frame grabs are taken from a DVD – for an idea of the BD quality, this link should help). If you need a primer on the formal style of Ozu’s films (though admittedly it just focuses on a few of the late works), I wrote one for my students a few years ago.

The rules are simple: I use a random number generator to give me five numbers, and these dictate the minute-marks of the frames I take from a DVD of the film. These three images then form the basis for a discussion of the film. The numbers are 7, 36, 41, 56, and 78, meaning that we begin with …

… a long shot down an alleyway. The significant movement can be seen in the background, as a crowd of children are following a kabuki theatre troupe that has just arrived for a season of performances in a coastal town on the Seto Inland Sea, Japan. The composition is in depth, and the strong lines towards a vanishing point are created by the kerbs on the alley, that draw the eye towards the excitable bustle of the people at the end. Typically for Ozu, the shot begins before they enter, and ends after they leave; this is part of a sequence that shows the troupe dancing and playing music through the streets to advertise their performances. The blue-grey palette will persist for much of the film (and it’s matched obligingly by the famously fine weather of the Inland Sea), punctuated by Ozu’s judicious drops of colour into the frame: carefully deployed objects gain prominence not as props vital to the narrative, but as markers of the framespace, balancing out the composure of an image, or just adding some detail and information about a location. Here, however important the action of the actors, it is pushed to a small, blocked-off part of the background, and your eyes might just as easily be magnetised by that empty sake bottle in the bottom left-hand corner. Then you might notice the barrels leaned against the wall, their elliptical shape and jaunty angle adding a little quirk to the hard-lined perspectival framing. You can also see a colourful poster for the kabuki shows on the left-hand wall. All of these details punctuate the frame – Ozu likes tidy compositions, geometrically balanced framings, but he’s not stuffy about letting in some bits of disorder, such as the diagonals in the rooves. But you’re mostly likely distracted by the little boy, who has broken away from the group to take a quick pee against the wall. It’s a funny little touch, a reminder that Ozu is not a dry formalist: inside his beautifully arranged images are occasional bursts of bodily vulgarity that keep you focused on the people, admitting everyday details into the protected spaces of the film’s formal patterns. 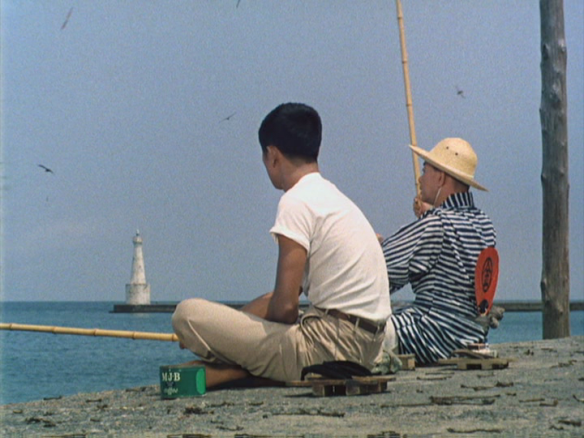 The head of the troupe, Komajuro Arashi (played by Ozu regular, and actual kabuki actor Ganjirô Nakamura) has brought his actors to this town not because it is an especially lucrative venue (it will turn out to be financially ruinous for them), but because he wants to spend time with his son, Kiyoshi (Hiroshi Kawaguchi). Of course, Kiyoshi doesn’t know this man is his father: his mother is a former lover of Komajuro, and presumably became pregnant on one of his visits to the town. This fishing trip is a chance for them to catch up, though Kiyoshi clearly understands more about what is at stake in his prying questions about the boys ambitions for the future. The lighthouse appears in several shots of the film, most notably the opening shot, where it is a jokey graphic match for another empty sake bottle. It marks the boundary between the town and wider world (it’s therefore a poignant place for a discussion of the future, and Kiyoshi’s plans to leave for college). It’s also a stolid symbol of stasis, in contrast to the “floating weeds” of the title, the actors who move from town to town, never settling down and unable to fully connect with home or family. Kiyoshi’s simple attire contrasts with Komajuro’s busier, more flamboyant clothing (stripes, straw hat, red design on the back of his yukata – I’m hoping someone with more knowledge of Japanese clothing can explain to me what that is…). Ozu stresses not the connections between them, but the awkward differences that set them apart. The little green bait tin on the ground strikes up a colourful symmetry with that dab of red, and the bamboo fishing rods, held in this frame at least at right angles to one another, complement the perpendicular lines of the quayside and the telegraph pole. 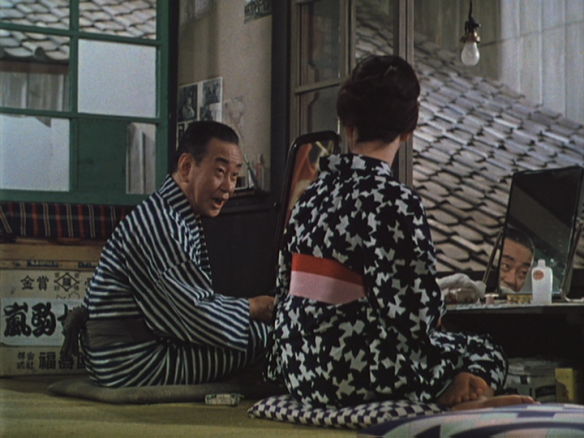 This composition is a mirror of the previous one, in terms of the arrangement of figures and lines, but it is now a riot of forms, shapes, patterns: the designs on their clothes, the roof-tiles, the text and photographs on the wall behind Komajuro, the grid of the window frame, not to mention the mirror on the dressing table that allows Komajuro to bully his mistress Sumiko (she’s played by Machiko Kyo, who you might recognise from her starring roles in Kurosawa’s Rashomon and Mizoguchi’s Ugetsu Mongatari) from both sides. They’re arguing about the time he’s spending with his former lover and their son: she’s jealous, and he’s warning her not to interfere. This is where they prepare for their performances, and Ozu must have relished the irony of eavesdropping on the ugly backstage quarrels of actors before they perform the epic dramas of the Japanese stage. It’s a good summary of the theme of acting as a metaphor for the performances, machinations and deceptions in which they are implicated offstage. When I first encountered Ozu, I was impressed by the rigour of his style, and its extremely pared down form, but I no longer see his work in that way. That is, what initially felt like a beautiful but rigid approach where everything was made to fit into a predetermined stylistic template, now provides more pleasure for the variations that occur within that grid of aesthetic choices. I’m more familiar with Ozu’s films from about 1950 onwards (there’s another two decades before then left for me to explore), and it’s certainly true that he repeats certain graphic tropes in the positions of his actors and the arrangement of the mise-en-scene (even moving props around between shots so that each composition is graphically precise rather than a verisimilar representation of that space), but these repetitions serve to sensitise me to the little details that pop out at me and make every shot a little nest of treasures. 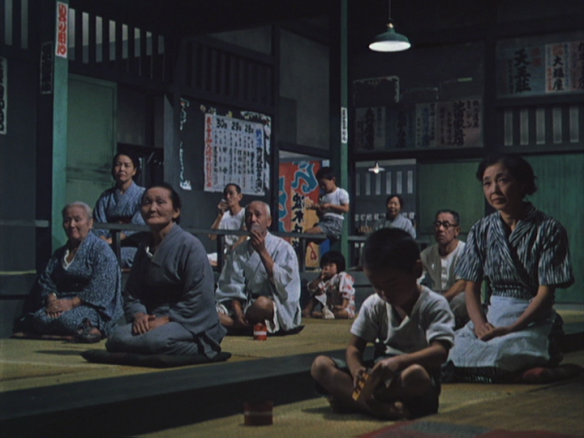 There’s also a nice metacritical moment whenever you get to show audiences on film. We the audience find ourselves watching other people watching a performance. But we’re also watching them perform the role of an audience. This shot tells us that the audiences are respectful, attentive, and engaged, but the house is far from full, and the crowd is hardly electrified by the show. It appears to be taking place in some civic building, not a purpose-built theatre, and the audience are dressed casually.  Prominent near the centre of the frame are the two boys, one in the foreground, the other leaning against a post in the background, neither of them paying much attention to what’s happening onstage. Is this a commentary on the generation gap when it comes to traditional Japanese culture, i.e. is Ozu bemoaning the youth’s indifference to kabuki, with its stylised delivery and opaque, arcane dialects? I suspect not – it’s probably telling us that this troupe, and this performance is nothing special. They’re performing scenes from a play about the legendary 19th-century outlaw and gambler Kunisada Chuji, played here (not seen in this shot, though) by Sumiko. Officially, women were banned from performing kabuki in 1629, when the Tokugawa Shogunate decreed that their presence was unseemly: initially, kabuki was performed almost entirely by groups of women dancing (it was also originated, in the 1590s, by a woman, Okuni), but since the ban, all roles have been played by men. Presumably, these rules do not apply to traveling companies in the 20th-century (the National Theatre of Japan upholds it as a tradition to this day), and it might take an expert to note that the performance we see in the film is not very well-rehearsed. We are given all the information we need to know by seeing the nonplussed reactions of these spectators. 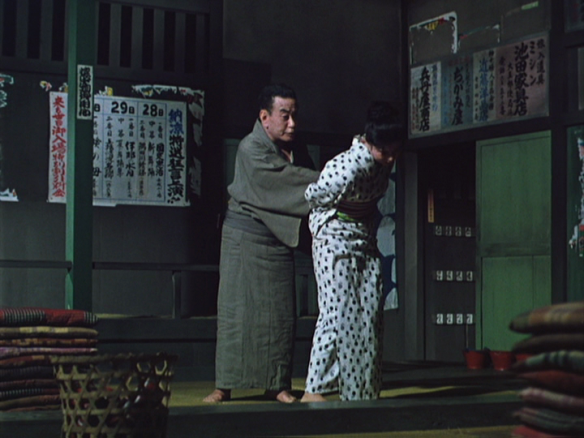 Ultimately, Floating Weeds asks us to sympathise with Komajuro, who has failed to become a triumphant, gloried actor to set an example to his son; his group disbanded, he is left to keep floating in search of the next itinerant acting assignment. Before that ending, Ozu seriously tries our patience with him. Aside from interfering in his son’s life and trying to talk him out of going to college (so that the boy can keep his mother company, something that Komajuro himself has also failed to do), and sacrificing the livelihoods of his actors for the sake of his visit to the town and his former lover, he is emotionally and physically abusive towards Sumiko. She does play quite a nasty trick on him, by encouraging an actress from the group to seduce Kiyoshi, thus reducing the boy through his association with their type (these actors were not considered as part of a high-class profession), but his violent reaction is shocking, and disproportionate, all the more so because it ends with her pleading for a reconciliation. The pace of Ozu’s editing hardly changes, and the camera never moves, meaning that the dynamics all come from the performances: here, the violence erupts at the centre of yet another immaculately composed frame, making it all the more eruptive and striking. The fact that he twists Sumiko around gives an impression not just of his physical strength but of his implied familiarity with brutality. Ozu doesn’t want it to be easy when you’re asked to take pity on this guy; maybe he wants to divide the audience’s sympathy – it’s not a given that you’ll accept this violence as a manifestation of his frustration at himself rather than his disdain for the women who rely on him. This is all taking place in the building where the troupe’s performances are held, setting up that contrast again between the heroics of the stage, and the rather seamier, embittered realities of the actors’ lives when the performances are over.