To restart the randomised series of posts (follow the link if you need a catch-up or want to read the earlier attempts at this), I thought it might be fun to try out some Pixar films, beginning, with no logic or reason whatsoever, with Monsters, Inc. from 2001. The way it works is this: using a magic bit of random number selection, three frames are generated from anywhere in the film, and provide the basis for a discussion of the film from unexpected angles, or at least angles that are not pre-selected to flatter my own interests. It’s usually fun, and the film needs little introduction, so let’s dive straight in. The randomiser has selected frames from the 5th, 66th, and 86th minutes from Monsters, Inc., which means we begin with… 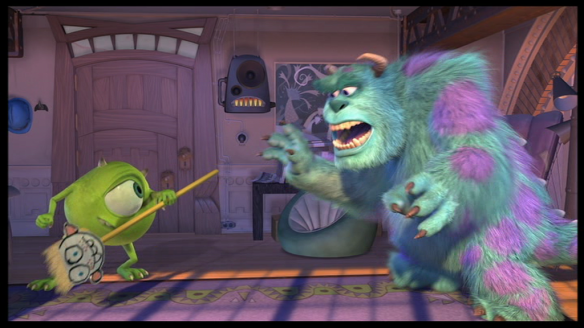 … a moment from a training montage, in which Mike (Billy Crystal) puts expert scarer Sully (John Goodman) through his paces. This is an alternative world where monsters have developed strictly regulated systems for the scaring of children (their world is powered by the energy created by children’s screams, making this a neat commentary on the ethical compromises that accompany energy industries’ attempts to find sustainable sources of fuel). All of the monsters have different bodies, exhibiting a seemingly endless variety of tentacular, multi-limbed or hairy forms. Mike and Sully are a particularly odd couple, Mike a round eyeball on green legs and Sully an ursine furry giant. Much was made of the development of procedural animation software for animating Sully’s fur (meaning that it could be programmed to move realistically in response to breezes or contact with objects without the animators having to move each individual hair), and it certainly draws the eye in and teases with the temptation to touch. Touch is the aspect most lacking from computer animation, so it seems important for Pixar to concentrate so much on minute details of texture and surface. The pastel coloured softness of it all indicates Pixar’s delicate navigation of the potentially scary material – how else might one make a film about monsters that isn’t off-puttingly frightening for its target audience? As with Toy Story, Finding Nemo, The Incredibles, Cars, Wall-E, Pixar have carried out extended, world-building responses to the question of how toys, fish, superheroes, cars, or robots respectively might behave if they had regular daily lives and problems and were able to express their thoughts about that world like ordinary humans. So, Mike and Sully are monsters, but they still need rugs and floorboards and chairs and paintings, all built to match their bodies and natures. It is this attention to detail in explorable, internally consistent (but never realistic) environments that rewards repeat viewings of these films. 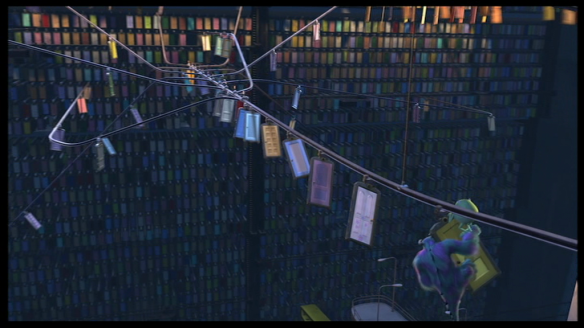 What a gift this image is. Mike and Sully are in the vast archive of doors that allows the monsters access to any child’s bedroom in the world. They are clinging on for dear life in an attempt to rescue little Boo from the evil Randall. This is a quintessential Pixar shot. In film after film, we get to see a chasmic vision of objects multiplied and arranged as far as the eye can see. Think of the towering stacks of identical Buzz Lightyears in Toy Story 2, the skyscrapers of compacted trash, or the rows of obese humans in Wall-E, horizon-spanning crowds of cars in Cars. Is this Pixar exploiting the advantages of CGI animation, which can create multiples of the same thing much more easily than hand-drawn animation, where each one might have to be painted individually? Is it a signature image of overwhelming data, a visualisation of how vast yet conformist this world can be, or a picture of the enveloping reach of institutions and societies? The library of doors is a wondrous invention – it is an enormous space that allows, through the quasi-magical devices that make the door into a portal into distant places, for the containment of all space. Monsters, Inc. is built around the joke that monsters, instead of being the stuff of fleeting nightmares, are part of a mundane, unionised bureaucracy. They don’t just lurk under your bed. They clock in first, they rehearse, they bring a packed lunch. And they have you all on file. I’m not sure whether this is meant to make monstery less threatening, more suitable for children’s entertainment, or whether it makes the whole thing more terrible, by sapping it of its psychic power: monsters, it suggests, are not projections of your neuroses, fears and internalised traumas. They come not from within, but from without. They’re not there to personally threaten and persecute you, but to use you in the service of a larger industrial project. This scene is the first time when we get to see, via the sudden pullback to our protagonists dwarfed by the filing system, the scale of the operation.

I’m surprised this has never happened before, the randomiser giving me a frame from the end credits. Thankfully, Pixar’s credit sequences are not an administrative space for simply listing the film’s personnel, but a chance to wind down with the characters outside of the borders of the narrative. As the names of the ‘systems administrators and support’ staff scroll up the screen, an inset frame distracts us with a performance of the musical ‘Put That Thing Back Where it Came From or So Help Me…’. This is a call-back to an earlier scene where, nearly caught with a forbidden child in his charge and shouting those very words, Mike Wachowski (Billy Crystal) ad libs the rather desperate explanation that they were rehearsing the title number for a forthcoming show. Here we see Mike and Sully making good on their lie by staging the show of the events we’ve already seen, replaying the panic as fun spectacle. The obvious joke of these out-take scenes is the pretence that the cartoon characters are not just bits of animation, but possess an independent life outside of the film’s fictional space. ‘Getting’ this joke requires us to know that animation is the opposite of independent life – it has (a semblance of) life only as the product of a technical process. CGI doesn’t even leave behind drawings, cels or other artifacts that might provide physical evidence that Mike and Sully were ever there, so it’s a friendly tease that helps in comical mode to connect the film to its manufacturers, to show off their willingness to poke fun at the potentially stifling, meticulous geek-work of the digital animation process. It’s a scene of warming down after the narrative has reached its ideal conclusion, with the characters all gathering onstage to go over events in fictionalised, musicalised form – in case anything had scared you, this is the final indication that all is safe again.