[See more of my posts about the work of Jan Svankmajer here.]

I swear there’s no significance to the coincidental recurrence of dolls and smacked bottoms on Spectacular Attractions. After the butt-centric opening scenes of thwacked toys in Disney’s Pinocchio, and the spankings meted out to Karen Carpenter’s Barbie effigy in Todd Haynes’ Superstar, I return to the subject with a visit to Jan Svankmajer’s Jabberwocky. Regular readers might remember that I’m more enamoured of Svankmajer’s short films every time I watch them: they’re simply some of the most densely layered and rewarding chunks of cinema in existence. Repeat viewings repay their spectators’ attentions every time. This particular film might also serve as a corrective to all the hubbub around Alice in Wonderland at the moment, to which I have already added my furious tuppence-worth. But let’s get back to those bottoms: 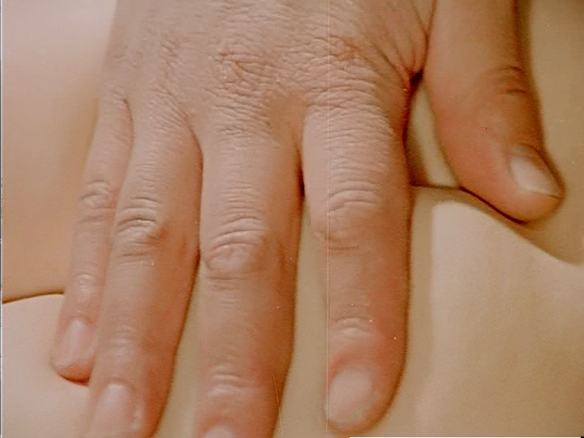 The spanked arse that opens the film like the clapstick that marks the start of a kabuki performance is not the only similarity to Superstar. Both films use dolls and their mutilation to explore the degradation of the subject in the process of socialisation. That is, dolls in both cases are made into metaphors for the ways people’s bodies are not their own, but the blank objects onto which are carved the pressures and injunctions of families and society. 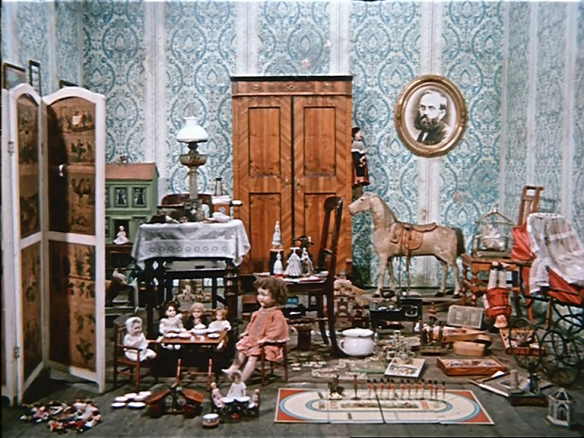 Like the stop-motion carriage that carries Nosferatu magically through the forest, a wardrobe glides towards the camera, opening its doors into a suddenly conjured playroom filled with toys and dolls (see a clip of this bit here).  The eyes of the stern patriarch in the photograph hanging on the wall seem to drive the room into active life under their disciplinary glare. It is over this opening sequence that Lewis Carroll’s poem, Jabberwocky, is read, a classic piece of nonsense verse originally worked into Alice Through the Looking Glass. Carroll may have intended it to be a parody of poetic pretension and epic. The first and last stanzas are the same, hinting at the circularity of the monster-slaying heroic plot, and it is filled with made-up words. Placed at the start of this film, it sounds like a spell that brings the toys to life, even as it suggests a rejection of propriety and authority through its association with Alice and the mocking of classical narrative.

As I’ve said before, Svankmajer’s films often have an incantatory structure. Their enchantment comes from the repetition of actions that leads to a conclusion marked by containment or escape. The Last Trick works through a series of competitive magic tricks leading to the final destruction of both magicians. Punch and Judy has similarly escalating violence, and ends on the guinea pig’s indifferent escape from the nihilistic circuit. Jabberwocky finishes when the trail of ink in a maze reaches the exit and squiggles out of the maze and scrawls defiant scribbles on the face of the father figure on the wall before following a squadron of paper aeroplanes out of the window. 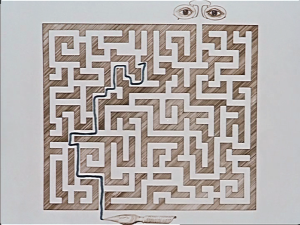 Prior to this, though, a spell is cast over hordes of objects, and the maze’s dead ends are policed by a witchy black cat that leaps through a wall of bricks. It’s a startling sight every time it happens, and the repetition works like a chastisement of the viewer – each time the maze appears, we anticipate the cat’s irruption into the scene, flinching with the memory of previous shocks like a child learning to expect a punishment shock with every attempt at escape. Only at the film’s conclusion is the cat caged, and the unguarded maze can be fled. 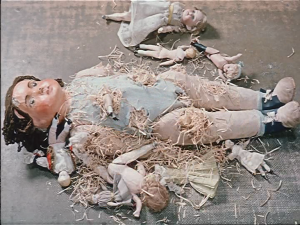 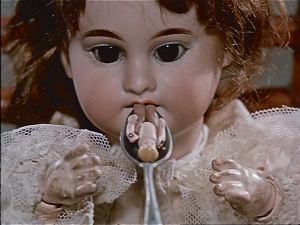 Svankmajer’s dolls start out as the innocent embodiments of childhood, playthings invested with life by the animation process. Quickly, their innocence is polluted, and they are put to work in a series of actions that knock them into submissive shape. Birthed out of the inert body of a larger doll, they are installed in a house that spins them round and spits them out to be ground into food for more dolls. They are ironed flat, boiled and baked to sustain a cannibalistic circle of stunted life and grotesque death.

Boys suffer a less drastic fate, but are instead trained to be self-important, militaristic men of action. The development of boys is conveyed through a series of symbols such as the sailor suit, hobby horse and the massacres of toy soldiers. The boy is not given a body, as the girls are (though their bodies are also not really their own), but instead is represented only by his clothes – the coat-hanger that stands in for his head and shoulders gives him basic shape, but doesn’t disrupt the symbolism of a child made by dress codes and pre-determined roles.

In his Surrealist Manifesto of 1924, André Breton argued that the innocent imagination of the child is, over time, forced into the constraints of sanctioned rationalism, incapable of love or fanciful thought because of the “imperative practical necessity which demands his constant attention”. Childhood remains a happy ideal, a reminder of a prelapsarian imaginative state with which Breton hoped Surrealist activism could reconnect:

If he still retains a certain lucidity, all he can do is turn back toward his childhood which, however his guides and mentors may have botched it, still strikes him as somehow charming. There, the absence of any known restrictions allows him the perspective of several lives lived at once; this illusion becomes firmly rooted within him; now he is only interested in the fleeting, the extreme facility of everything. Children set off each day without a worry in the world. Everything is near at hand, the worst material conditions are fine. The woods are white or black, one will never sleep.

But it is true that we would not dare venture so far, it is not merely a question of distance. Threat is piled upon threat, one yields, abandons a portion of the terrain to be conquered. This imagination which knows no bounds is henceforth allowed to be exercised only in strict accordance with the laws of an arbitrary utility; it is incapable of assuming this inferior role for very long and, in the vicinity of the twentieth year, generally prefers to abandon man to his lustreless fate.

Jabberwocky is a compendium of symbols, isolated images that interconnect and build like puzzle pieces into a powerful vision. Svankmajer’s metaphors are not always esoteric or obscure – it’s not a great leap to see child’s toys as stand-ins for children themselves. But his films have a great legibility, and gather strength from the avalanche of reinforcements for its central idea that the education of children is a vicious inculcation of values that pacifies girls and makes warmongering imperialists out of boys. It instills automatic reflexes of obedience and mindless mimicry, and dolls, transformed into automata under the animator’s manipulations, are the perfect vessels for this manipulative thesis. 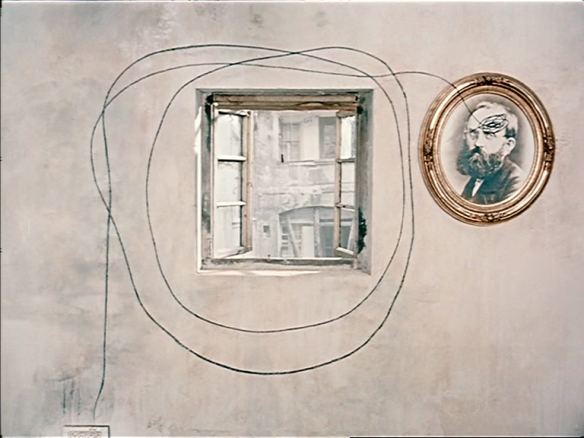 Michael Sporn has some images from a planned Disney version of Carroll’s poem that was to have been included in Alice in Wonderland.

Need a reminder of Carroll’s poem? Why not have it performed for you by the Muppets: