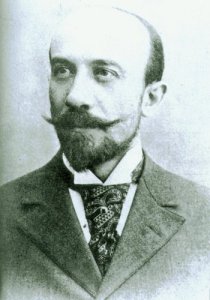 [This is a guest post by one of my undergraduate students, Izabella Curry. The assignment was to produce a set of notes for an imaginary programme of short films, connecting them by theme, artist or aesthetic. See more student work here.]

Georges Méliès, performer turned filmmaker, is renowned for his love of magic and the development of many innovative special effects. Although many of his films reflect this passion for theatre magic, Méliès himself is quoted as saying that filmmaking and theater “…are totally different processes”. One of his most noted discoveries was substitution splicing, which he famously discovered whilst shooting a street scene when his camera jammed causing one object to transform to another. He used this technique to create films depicting magic shows, generating ‘tricks’ not through the magician’s slight of hand or specially designed apparatus but through the editing. The Vanishing Lady (1896) is the first evidence of Méliès’s use of this effect, which quickly became a common trait of his films. 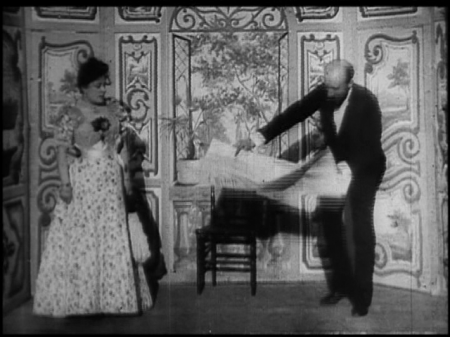 The Vanishing Lady depicts a magic show shot from a single camera position from the perspective of an audience member. As with many of Méliès’s films, in contrast to modern day films, gestures are made towards the audiences. The pair bow, both at the beginning and the end of the film, and the magician makes gestures to the ‘magic’ as if presenting it to the imaginary audience. This acknowledgement of an audience paired with the film’s French title that references the Theatre Robert-Houdin indicates Méliès previous profession on the stage. The overt awareness of the audience works with the theme of the film as a show, therefore the presumption that it is performed to somebody. However, the use of gestures and addressing of the camera’s presence is common in most of Méliès work, including the more narrative-centered texts, which to a modern audience is surprising. This film is also a precursor to Méliès’s seeming fascination with the female gender. The presence of women in his films can be read in two ways: firstly to exhibit his power over women via the use of them as the subject of the magic; secondly, it could be read as a sexual frustration, such as in A Nightmare when a woman appears on the end of his bed. He tries to grab her and she is transformed into a man. This is also present in The Astronomer’s Dream, in which a lady lies provocatively on the crescent of the moon as the astronomer tries to reach her. Still, as seems to be the case with most of Méliès’s films, it is the special effects that are the main attraction. Although the film seems to be captured in one take there are in fact four breaks where the shots have been spliced together to create the disappearance and appearance of both the lady and the skeleton.

This said, although in the context of the period this technique is exceptional, the film itself is in fact one of many magic displays he made using film during his career. More original perhaps is what is believed to be the first film adaptation of the classic fairytale Cinderella (1899). Once again Méliès has been credited with another film technique milestone, the dissolve. Cinderella seems more narrative-based and its three dissolves allow a smooth scene transition signaling the next part of the story. However, although the film clearly tells a story, it is often asked if Méliès valued the narrative or if the plot was just a vehicle for the special effects. Ezra talks about the non-diegetic inserts as features of the ‘cinema of attractions’. She states that there are three in Méliès’s films: the character bow, as seen in The Vanishing Lady, the dance sequence and the spectacular tableau, both of which feature heavily in Cinderella. They are moments not necessary for the narrative, but rather guilty pleasures for the eye.

For example, in Cinderella there is a dance number by Old Father Time and a chorus of girls who transform back and forth between human and clock [see video above]. I guess it could be argued that this enhances the fantastical theme of the film; nonetheless, it is clear that these prolonged dance sequences are an opportunity for the demonstration of Méliès’s film techniques. 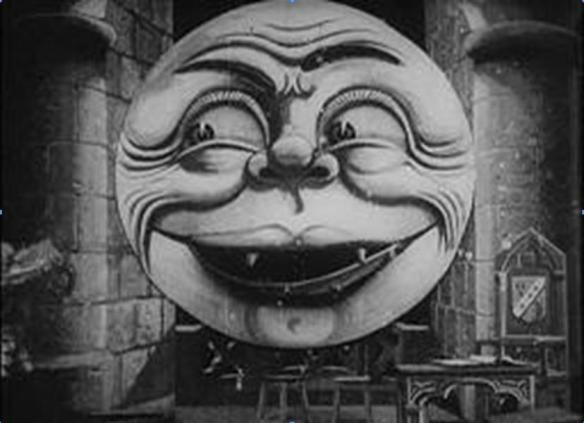 Cinderella, however, is not the only one of Méliès’s films whose plot is centered on fantasy. His films have recurrent themes of dreams, mystical characters and, predictably, magic. His film A Nightmare (1896) and his later, longer and more elaborate version The Astronomer’s Dream (1898) both depict a dream. Similar techniques are used to those in The Vanishing Lady (what looks like the same painted backdrop is used). However, in A Nightmare Méliès also uses substitution splicing for the backdrop as well as the characters, depicting the main character being carried by his dream into another world entirely.  A Nightmare is the oldest example of “Méliès’s Lunar Fantasies” which are a recurring theme in his later films such as A Trip to the Moon (1902). Cinema has since continued to be obsessed with the ‘moon movie’ both in the science fiction and fantasy genre, and it seems like once again we owe this to George Méliès’s humorous depiction of the man in the moon. However, in both The Nightmare and The Astronomer’s Dream the moon is depicted as a more menacing character than in A Trip to the Moon. It begins as part of the background, and through splicing Méliès creates the effect of it growing as it comes closer resulting in the moon consuming most of the shot. Although he seems to attempt to portray the moon as an ominous figure with a large mouth and what seem like an appetite for humans, the oversized mechanical props used in both films give it a comical edge.  The Astronomer’s Dream also uses enlarged props to aid the narrative, to ensure the audience notice everything within the mise-en- scene.

Méliès used complex mise-en-scene to create these imaginary worlds, all within the restricted area possible to capture the shot. This is also evident in Cinderella when the ball scene is almost amusing, as the party guests struggle to take baby-steps during the dance to remain within the frame. So it seems that Méliès not only pioneered many essential techniques in film but he did this all within the restriction of the basic technology present at the time. He was a playful yet innovative filmmaker who used his knowledge of theatre magic to create real magic on screen.

3 thoughts on “Georges Méliès: A Magician at Work”