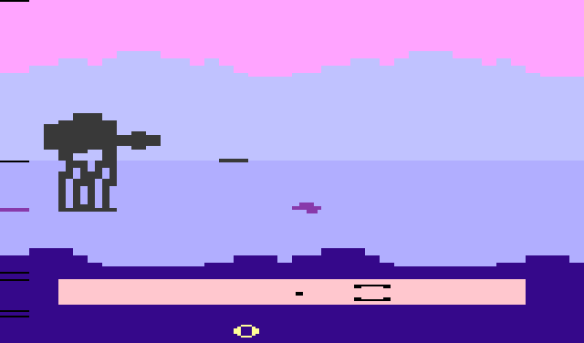 Continuing the occasional series of Star Wars Randomised posts (see here if you need to know what these are), I come to The Empire Strikes Back. This was the first Star Wars film I remember seeing in the cinema. My family was on holiday in Dublin, and I and my siblings were taken to see it as an evening treat. Mostly what I remember was Yoda, who I assumed was a member of the muppet family and therefore entirely hilarious at all times. But my memory of the story was bolstered by a second viewing (on a double bill with the earlier film), and by the toys, books, trading cards and magazines that help to extrude the afterlife of the film and embed it firmly in the brain.

The numbers randomly generated are: 25, 89, and 101. I take frame grabs from those minute marks and use them as prompts for discussion. The bonus number is 40: that’s the one I’m handing over to you, readers, so dust off your critical faculties and get ready to tell me stuff…

The Star Wars films move from planet to planet with the greatest of ease. This is not the barren, vast space of 2001 or Alien: it’s a galaxy teeming with life, each new world a monoclimatic, colour coded waystation for a a section of plot. There’s Endor, an entirely forested moon, Tatooine, the desert planet, Coruscant, its whole surface urbanised, and this – Hoth, all snow and ice. Its white surfaces are a retina-searing place for a battle, a bright open space that offers no shadows in which to hide. The Rebels troops are massively outgunned. They’ve just spotted the Imperial forces’ giant walking troop carriers (AT-ATs, if my memory of the action figures serves me right) approaching, their eyes aimed at the distant enemy. They know they’re pretty much screwed. It’s just a matter of buying some time while the Rebels evacuate their base. Writing this down, it sounds pretty trite, but the spectacle comes from the succinct reduction of the conflict to its powerful visual elements: definite lateral movement (the Rebels face and fire in this direction, the Empire advances inexorably from the opposite side), a diagonal composition in this shot scatters the troops in a loose, rather scrappy and pathetic formation. This will be intercut with the assured march of the Empire towards them. And when, oh when, will we get these wrist-mounted intercoms that science fiction has been promising us for so long? Again, there are few true gaps between places in the Star Wars universe: spatial gulfs can be spanned with this proliferation of communication devices, or hyperspace jumps that collapse huge distances in seconds. Scenes of isolation, out of radio contact or away from other people, are almost always scenes of isolation and fear.

For a smart-mouthed gun-slingin’ hero, Han Solo (Harrison Ford) certainly suffers a lot in this film. Here he is in a prison cell shortly after being tortured with some kind of electroshock machine, and shortly before being encased in carbonite (all of the nonsense science in Star Wars is stated with casual confidence – there are few astonishing “new” technologies for the people involved, rarely even any expressions of surprise as they arrive on strange new worlds): I remember seeing this as a six-year-old and asking my mum if Solo was dead. Whatever they were saying on the screen about his life signs, I couldn’t imagine how being “in a statue” was not the same as being dead. In this shot, though, Han is on the way to his statue-state. The torture has knocked the swagger out of him. The smirk has fallen from his mough, and the dark shadows emphasise the sag in his face, the pallor of his skin, the frown on his brow that expresses disappointment that his roguish heroism has been met not with a similarly spry, moustache twirling villainy, but with a medieval set of restraints, jabs and agonies. Why won’t the enemy spar with him on his own terms? the stark, corugated iron (?) backdrop and the off-centre framing accentuate the disempowerment. Princess Leia (Carrie Fisher) has been moved to his defence from his earlier standoffish flirtation. Her hair is gradually evolving from the tight buns she wore in the previous episode, snaking down the sides of her head as her affection unfolds: sad to see that her initial assertiveness is being equated with tightness, a quality to be outgrown rather than one to direct productively. In the flirtation that characterises their relationship during most of The Empire Strikes Back (and reminds us that it shares a co-screenwriter with The Big Sleep), they are equally matched: by this point, he has gained the sympathetic highground by getting the crap kicked out of him, but he gains it at the expense of his agency and heroic prerogative.

The darkness of the film is often cited as its strength, positioned between the boyishness of the previous and the teddy bears’ picnic of the subsequent episodes. The shadiest chiaroscuro effects are reserved for the scenes of Oedipal revelation as Luke Skywalker (Mark Hamill) battles the arch-villain who turns out to be his father (he has, by this point, stopped coming onto his sister…). Here, Luke looks down into the pit where he has just thrown Darth Vader. The low shot and confident stance seem to give him a superior positioning, but his size within the frame, and the prominence of opaque spaces in the frame suggest that he is still in danger. The lightsaber is another bit of impossible science that makes perfect sense – it works like a sword, and permits the film to borrow the intimate aspects of swordfighting (the proximity to an opponent, they attempt to inflict injury directly to their bodies) as opposed to the remoteness of gunplay. Hence, emotional conflicts are usually manifest as sabre fights; they evoke a chivalrous age at the same time as their alien technology suggests an unfathomable futurity for the films’ spectators. Plenty of sf technologies aim to provoke the flash of recognition that comes from seeing a gadget that one hopes will eventually arrive to make life easier. Star Wars paradoxically provokes nostalgia instead: its technologies return us to the sword and the cloak. Its inventions are not necessities to one day make our lives easier, but tropes of other genres (pirate, cowboy, knight) shifting to the back and to the side in space and time.

And here, from the 40th minute of the film, is your turn. What can you tell me about this frame? Anything at all. Surprise me…

5 thoughts on “Star Wars: The Empire Strikes Back Randomised”