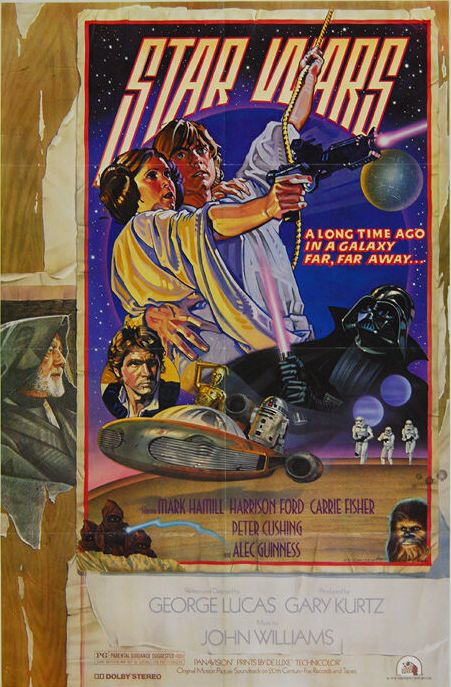 [For other Randomised posts, and an explanation of the rules of randomisation, go here.]

In a brazenly populist gesture, I thought I’d start a weekly(ish) series applying the rules of Randomisation to George Lucas’ reasonably well-known toyshop sf-western franchise. I’m going to start with the first film, i.e. the one released in 1977, before it was retitled Episode IV: A New Hope in 1981 (I once had a stand-up shouting match with a hardcore fan who swore blind that it had always been subtitled “Episode IV” since it’s first screenings. Thank goodness these days anyone with 30 seconds to spare and access to Google can settle these squabbles with more civility). However, I am lumbered with the 2004 DVD versions, so I’ll have to note “special edition” embellishments/vandalisms should they arise.

In keeping with the traditions of Randomisation, I won’t say much more about the film – I’ll just let the random number generator pick me three numbers, then grab the frames corresponding to those minute marks from the DVD, and get on with it. The numbers are 13, 66, 80. The bonus number is 109; this is a new feature I’m introducing for the Randomised series. I’d like you, dear readers, to fill in the entry for the fourth number for me. Please join in and help out on the comments thread below and see if you can suggest points of interest raised by the image.

Now, on with the pictures:

Well, this is a challenging one. Not the most “active” shot. This is the vacuum tube that is descending menacingly to suck up R2-D2 into the Jawas’ sandcrawler. It fills the dark frame, and the camera tilts down with its movement, in thrall to its big black mouth. It’s like a giant version of those pneumatic tubes they used to use to send messages.:R2 (follow him on Twitter here) is about to be sent like a memo into the inside of the transport. The Star Wars films are filled with shots of people (and other things) getting in and out of vehicles, racing through corridors, trenches, narrow spaces etc. It’s a real tug-of-war between wide shots of outer space or open landscapes, and people being passed from one metallic interior to the next. The Jawas, chirpy little buggers who come off like a swarm of eager market traders, make their living by rounding up and reselling old droids. The reduction of two of the films main protagonists (C3P0 is also picked up) to another bit of second-hand junk is at once a neat comic device for getting them to where they need to be (meeting Luke Sykwalker), and an establishing scene of their singular identity: no other robots in the series are permitted this level of agency, the chance to rise up from the pack, escape and go AWOL. This mammoth suction tube, a reversal of the escape pod that blew them out of the rebel ship at the beginning, is a reminder of others’ perception of the droids status as machines, commodities to be processed and delivered accordingly.

Here’s a shot that has been modified slightly for the DVD release. A large pink flash as an Imperial guard is shot in the assault on the detention centre. It seems like an attempt to tone down the violence, to soften the blows of Luke and Han’s rescue of Princess Leia. The guard’s right hand was going for his gun,  so we know that he represented an immediate danger, but this bad guy has been outgunned. In lessening the impact of the death, they could’ve censored the image by erasing the pain from his face, but it’s the pink flash that has been wiped away. That burst of candy-floss pink would, if nothing else, have clashed viciously with the colour scheme of the rest of the shot. The evil of the Imperial forces is suggested in part by their mastery of colour, mostly blacks and greys, with deep red in the back of this shot. See how the guard, in his uniform, almost disappears into the decor. Even the badges that signify his rank (or maybe his scouting abilities?), match the buttons on the consoles around him: he is shown to be another integrated component of the death star, and killing him just a necessary point in navigating the outposts of the space station.

For more on the special edition alterations, some of which continue this project of “cleaning up” the film or mollifying the killings, follow this link.

In the garbage compactor (Brits like me might have called it a “rubbish squasher”) on the Death Star, Princess Leia and Han Solo struggle to get on top of the “garbage”: the Empire clearly has a different kind of garbage to the rest of us. I see no milk bottles, potato peelings or ice-cream tubs. If you want to judge a regime by what it bins, then the Empire is clearly fixated on machines, metal and rubber piping. And you can bet they’re not planning to recycle any of this stuff. The compactor is lit like an infernal backstreet, like the outsides of clubs where you see people get mugged in movies set in New York. And it’s not very well designed: surely a waste disposal unit big enough for people to get inside (there’s a door) could easily be fitted with an emergency “off” switch? But then, the functionality of the Death Star’s equipment is wholly ruthless. Not a single surface, fitting or fixture dedicated to leisure. I say this not as a flippant swipe at the film’s design, but to remark upon its singular efficiency. George Lucas is renowned for marshalling the finer points of design and environment to create an impression of lived-in worlds, but actually I find them to be wholly subordinated to the project of setting up a dichotomy between rustic rebels and machinic rulers. The Empire’s war rooms, detention centres and hangars are fussily clean and smooth, so to find our heroes suddenly in the digestive system of the centre of operations, and for it to still be full of metal, is a nice touch.

Now, over to you. What do you make of this image from the 109th minute of Star Wars? Show me how it should be done: