Do the Right Thing is motivated by and structured around ambiguities of knowledge, clashes of righteous views and irreconcilable communication problems. At one point, an argument between Mookie and his sister Jade (played by Lee’s own sister, Joie, herself a writer/director/producer) takes place in front of a wall that is shown to be graffiti’d with the statement “Tawana told the truth”. This refers to the Tawana Brawley rape allegations that surfaced in 1987. You can read the Grand Jury’s report on the investigation here, but the gist of it is that Brawley accused an unnamed group of white men of abducting her and subjecting her four days of sexual abuse in the woods before returning her in a rubbish bag. The Grand Jury found evidence to contradict her claims, and a New York prosector alleged to have been one of the attackers countered by successfully sueing for defamation. 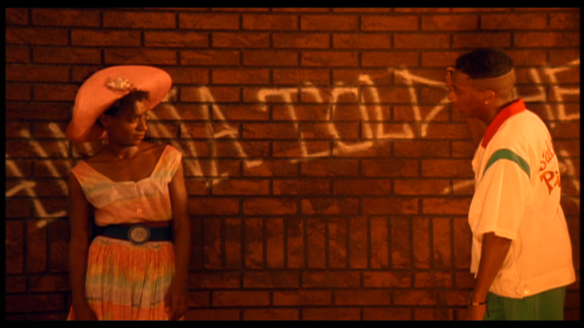 What are we to make of the slogan’s inclusion in the film? Is it one of Lee’s editorial flourishes, like the “Dump Koch” graffiti that represents the director’s admitted hopes for the outcome of the New York Mayoral elections? Is Lee so certain about Brawley’s allegations that he can confidently side with her in this way? Or is it a more subtle ploy? The argument undermines Mookie’s/Lee’s authority, and so the tension of the exchange fights with the unequivocal tone of the backdrop, where an assertion made publicly goes unchallenged. Whatever one’s opinions on the Brawley case, the inconsistencies in her story are enough to raise serious doubts. If you’ve ever read an interview with Spike Lee (there are some links at the bottom of this post), you’ll know that he’s a sparky character with very strong views that he’s not shy about sharing but, to his credit, Do the Right Thing shows the destructive, disunifying effects of entrenched prejudices and misdirected enmity. It shows a community under pressure from heat, disenfranchisement and municipal authorities whose petty problems pull the lids off deeply held historical resentments and create an explosion of violence that ends to nobody’s advantage.

The film finishes on the following pair of quotations, worth repeating here:

Violence as a way of achieving racial justice is both impractical and immoral. I am not unmindful of the fact that violence often brings about momentary results. Nations have frequently won their independence in battle. But in spite of temporary victories, violence never brings permanent peace. It solves no social problem: it merely creates new and more complicated ones. Violence is impractical because it is a descending spiral ending in destruction for all. It is immoral because it seeks to humiliate the opponent rather than win his understanding: it seeks to annihilate rather than convert. Violence is immoral because it thrives on hatred rather than love. It destroys community and makes brotherhood impossible. It leaves society in monologue rather than dialogue. Violence ends up defeating itself. It creates bitterness in the survivors and brutality in the destroyers. (Martin Luther King, Jr.)

I think there are plenty of good people in America, but there are also plenty of bad people in America and the bad ones are the ones who seem to have all the power and be in these positions to block things that you and I need. Because this is the situation, you and I have to preserve the right to do what is necessary to bring an end to that situation, and it doesn’t mean that I advocate violence, but at the same time I am not against using violence in self-defense. I don’t even call it violence when it’s self-defense. I call it intelligence. (Malcolm X)

The two activists are often portrayed as polarised in their views on how best to achieve civil rights for African-Americans, and Lee uses the two quotations to suggest the ambiguities and conflicts in the debate, but the picture  (above) that Smiley pins up in the smouldering shell of Sal’s pizzeria shows them united, harmonised, as if non-violence and direct action could be interchangeable selections from the same menu, or as if an insoluble difference of approaches to the same problem might be transcended by common cause. This is surely Lee’s most compelling, gripping film to date: he’s managed to balance the tonal diversity of his earliest elements to paint a nuanced portrait of a time and place where good people lose control. Most of the characters oscillate between worthiness, righteous indignation and ignoble inaction, making it difficult to take sides.

Even if one sympathises with Buggin’ Out’s plea for pictures of black cultural heroes on Sal’s Wall of Fame (it is, after all, a justifiable wish for proportional representation), he’s an obnoxious, aggravating figure who ignores the similar lack of Korean or Puerto Rican icons in the pizzeria. Nobody would support the chokehold killing of Radio Raheem by the police, but Lee refuses to make him a noble innocent; throughout the film he is an aggressive, threatening presence, accentuated by the closer-and-closer close-ups that the director pushes on the viewer.

This confrontational style is a key part of the film. Always fond of some direct address, Lee frequently makes his characters talk directly to the camera, or uses canted angles to dynamise dialogue scenes. 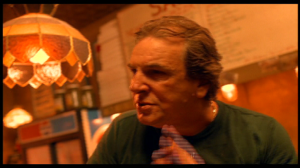 These techniques really come to the fore in a famous scene in which an argument over cultural representation between Mookie and Pino (John Turturro) reaches a stalemate and gives way to a montage of direct-to-camera torrents of racial abuse from various members of the community: 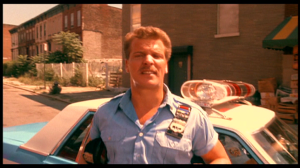 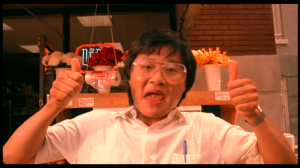 Ed Guerrero is very eloquent on the topic of the racial slur montage:

By pitting various races, identities and groups against each other on the rawest emotional level, regurgitating the vilest, innermost thoughts and stereotypes about one another, Do the Right Thing depicts the danger and futility of bigotry and racism at a personal level, from which no social formation is exempt. As importantly, this montage works to reveal the how of racism while not necessarily addressing the racism’s greater structural and strategic why. That is to say, this litany of racial slurs functions to show how racism works on the interpersonal level, between individuals as targets, representatives of groups, while, perhaps inadvertently, masking the greater why of racism’s workings at an institutional, structural level, as a strategy of hidden elites – “the powers that be” – to keep races, classes and movements divided and fighting among each other, thus distracted from the ignored or concealed, truth of their mutual exploitation. Notably, all of the participants of this montage as working-class males share the same gendered, social orientation. Rather than following Do the Right Thing‘s thematic hip-hop call to “fight the power”, these angry, isolated figures representing different races scapegoat and fight each other instead.

In these lists of racial slurs, many of the attacks resort to insults to cultural icons: Michael Jackson, Frank Sinatra, etc., and this thread runs through the film as characters use them as visible markers of ethnic difference. Buggin’ Out extrapolates a territorial argument from the scuffing of his Air Jordans, and then objects to the pictures of Italian Americans on Sal’s Wall of Fame; Mookie takes Pino to task for mouthing racist language while appreciating black athletes and musicians; Radio Raheem battles a group of Puerto Ricans over the relative volume of their music. INn all these instances cultural iconography seems to be territorial tags, masks for deeper ethnic hatred: it’s a struggle over the equal representation of cultural preferences, but also a transference of furious energy onto prominent symbols. This is summed up in a verse from Public Enemy‘s Fight the Power, which plays several times in the film:

Elvis was a hero to most
But he never meant shit to me you see
Straight up racist that sucker was
Simple and plain
Motherfuck him and John Wayne
Cause I’m black and I’m proud
I’m ready and hyped plus I’m amped
Most of my heroes dont appear on no stamps
Sample a look back you look and find
Nothing but rednecks for 400 years if you check
Dont worry be happy
Was a number one jam
Damn if I say it you can slap me right here
(get it) lets get this party started right
Right on, cmon
What we got to say
Power to the people no delay
To make everybody see
In order to fight the powers that be

The film’s title is a firm injunction to act positively, to take a stand, but it’s never quite clear what doing the “right thing” might be. Everyone seems to have a personal opinion about what is right. The most prominently contentious moment is when Mookie instigates the final assault on Sal’s by throwing a dustbin through the front window. This might be an altruistic gesture to divert attention from Sal and his sons, saving them from a mob attack, or he might just be taking sides, marking definitively his refusal to keep acting as neutral mediator between Sal and his objectors. But if this is taking a stand and “doing the right thing”, then it certainly doesn’t solve the roots of the problem. Just as with the team-up of Martin Luther King and Malcolm X, it suggests that there might be many right things, and that right things are rarely easy, and might not make everything OK. 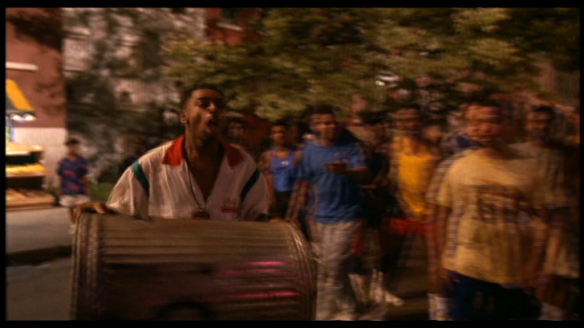 For a complete change of tone, one of my colleagues put me onto this great little mash-up of Do the Right Thing and Sesame Street (not suitable for kids – it really is brought to you by the letter “F”):