I’ll tell you a secret: if you make the screen dark enough, the mind’s eye will read anything into it they want! We’re great ones for dark patches. … The horror addicts will populate the darkness with more horrors than all the horror writers in Hollywood could think of.   (Val Lewton, Life magazine interview, 25th Feb 1946)

Now that the cinemas are packed full of dogs, it seems like a good time to revisit Jacques Tourneur‘s dreamy Freudfest, Cat People. My students are watching it this week, so I was reunited with it after a separation of over a decade. I was utterly beguiled by it once more, so this might eventually become one of those posts that I add to periodically. For now (I hope this blog hasn’t started to display traces of the haste in which it is often prepared…), I’d just like to focus on those “dark patches” noted by the film’s producer, Val Lewton, in the quotation above. Lewton and Tourneur use low-key lighting to create a chiaroscuro effect in many scenes of the film: that is to say, the lighting is arranged to emphasise the distinctions between darkness and light. Chiaroscuro, an Italian word literally meaning “light-dark”, can be an expressive effect that envelops important elements of the frame in a vignette of darkness, as in this 1768 painting by Joseph Wright of Derby, one of my favourites (you can see the original in London’s National Gallery):

(Want a much closer look at this painting? Go here.)

The strong central light source shuts out the rest of the room, bringing the eye in to the intimate wonder of the scene of a scientific demonstration (one of Robert Hooke and Robert Boyle’s air pumps that creates a vacuum in the jar, thus suffocating the cockatoo). There’s a motif of literal “enlightenment” here, but also an air of trepidation about the unseen zones that are obscured by blackness. That may be a subjective response, but that is Lewton’s point – with the proper cues, a spectator can be encouraged to fill in the blanks with something frightening.

Cat People is the story of a relationship between Irena Dubrovna (Simone Simon), a Serbian-born woman living in New York, and Oliver Reed (Kent Smith), a construction designer who seduces and marries her. Irena is haunted by the legend of King John of Serbia, who supposedly slaughtered the country’s witches, represented in cat form on a statue she keeps in the centre of her apartment.

Irena believes she is descended from the wisest, wickedest witches who escaped from King John’s sword to the village where she was born. This imagined link to a devil-worshipping, un-Christian heritage makes her distinctly problematic when she is required to fit in with the need to assimilate with the romantic, cultural and spiritual expectations of her adopted homeland in the USA. The job for the film’s spectator is to decide whether or not this is all in Irena’s head, and whether the legend is just a cover for a psychosexual fear, a common-or-garden “frigidity“. We are given lots of teasing clues. In one shot, Irena seems to be scrutinised by cats above her head:

This is from the painting Manuel Osorio Manrique de Zuñiga (1784–1792) by Francisco de Goya. In the full version of the picture, you can see the keen-eyed cats (situated in the dark half of the image) staring at a magpie, while the birdcage to the right foreshadows the pet bird that Irena will later kill when she comes over all feline: 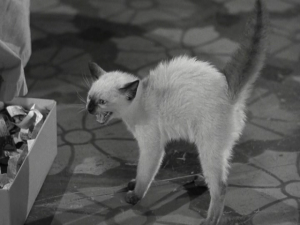 Cats get spooked every time Irena is near, showing off that sixth sense that animals always seem to have in scary movies, but we’d have to be fairly irrational to confirm Irena’s cat-woman condition on the evidence of a few raised kitty-hackles. Irena’s confinement indoors and in marriage, confirmed by images that imprison her within an oppressive mise-en-scene, cements the empathetic bond she believes she shares with the film’s many caged creatures. 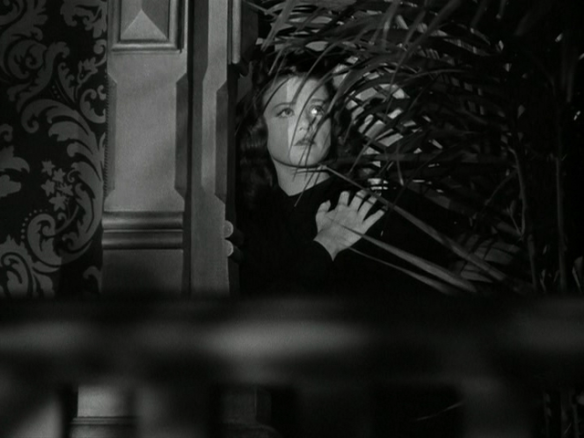 Irena is thus surrounded by images that foreshadow her fate or point to her feline alter ego so often that we might conclude that these are accumulating influences that create an imaginary cat persona in her mind, weighing her down with illusions of a historically and culturally enforced identity that preserves her with the markers of an ancient nationality: in that sense, Cat People might be an elegant expression of the immigrant experience, as Reed tries to squeeze these influences out of her and turn her into an all-American (i.e. like Alice), sexually pliable bride. His lack of imagination and his distrust of Irena’s culture are signposted throughout. In his  1998 study of Tourneur’s work, Chris Fujiawara notes:

Oliver’s Americanness takes a variety of forms. At Sally Lund’s, a restaurant near his office, he eats nothing but apple pie whereas, at a meeting to discuss whether he should have Irena committed, Judd orders Roquefort and even Alice has ‘the Bavarian creme’. Oliver has never known any artists, and he has never been unhappy. Bodeen’s script has him quoting Keats to Alice in the first scene at the zoo, but this touch is eliminated from the final film, in which Oliver’s prosaic nature is unmitigated. His lack of imagination and his inability to believe in Irena’s experience of the supernatural render him as unable to help her as is Judd and make him the inadvertent cause of her destruction.

Reed has no empathy with her bride. To him, she is all charisma, an enigma, but he’s not interested in the possibility that there might be some reality behind it. When he can’t own (i.e. have sex with her) he loses interest and transfers his attentions back to the readily available Alice. So, Irena’s otherness, and her problems of reconciling her culture and her location make this partly, in Fujiawara’s words “a tragedy of displacement.”

Most strikingly perhaps, Tourneur generates a fearful atmosphere by using darkness to shrink the space around individual characters. This might involve a strong central light source that emphasises the dark zones on the periphery of the frame: 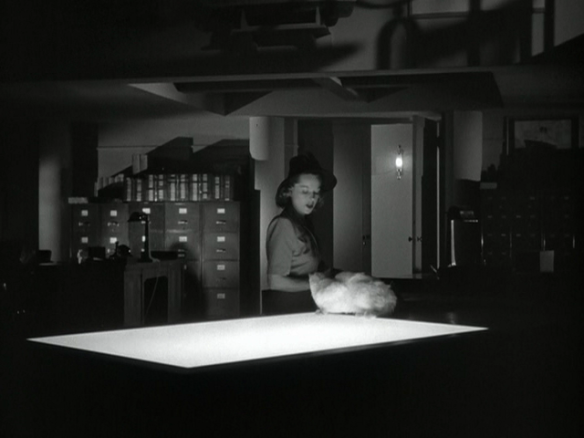 Or it might be a more subtle vignetting effect that encircles the figures, casting strong shadows that depict a dual identity or allow the darkness to impinge upon the light areas of the frame:

Fujiwara argues that these dark spaces at the edge of the frame create a space around the characters which extends into offscreen space and “merges into, and mirrors, the darkness surrounding the film audience.” Sometimes this is actual darkness, sometimes it is the figurative darkness of a sensed but unseen presence. Two sequences stand out. The first sees Alice walking home and apparently being followed by Irena. The shadowed areas of the shots gradually overpower the light, suggesting a menace closing in, but aligning Irena’s presence with the darkness itself.

The second sees Alice pursued by a presence she can barely set eyes on in the swimming pool of her YWCA building. Cutting between shots of Alice’s mounting fear and eerie shots of empty spaces (a stairwell, the ceiling, the sides of the pool), Tourneur creates tension from Irena’s absence. We know that she is in the building, but just as in the pursuit scene previously, during which her footsteps drop out of the soundtrack (maybe because she has changed her high heels for panther paws), the ellision of Irena from the image transforms her into a presence detected by the viewer’s imagination. She slips into the darkness, and even into the gaps between shots: where continuity editing usually synthesises the presence of an actress from disparate fragments of footage, here Irena’s presence is felt because it is expected, because the sequence of shots seems to suggest that she is moving around the room. But still she refuses to materialise; the only hint we get of her feline presence is a glimpse of a shadow which plays on the wall for a couple of seconds, actually a shadow made by Tourneur’s fist. J.P. Telotte has said of this absence that it “signals a black hole or vacant meaning in the physical realm which, in spite of man’s natural desire to fill it with consciousness and significance, persistently and troublingly remains open.” 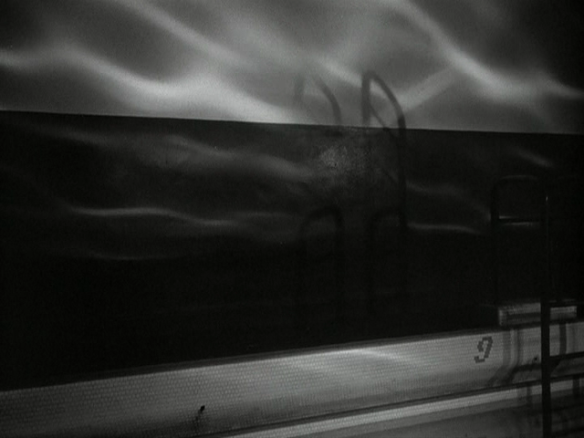 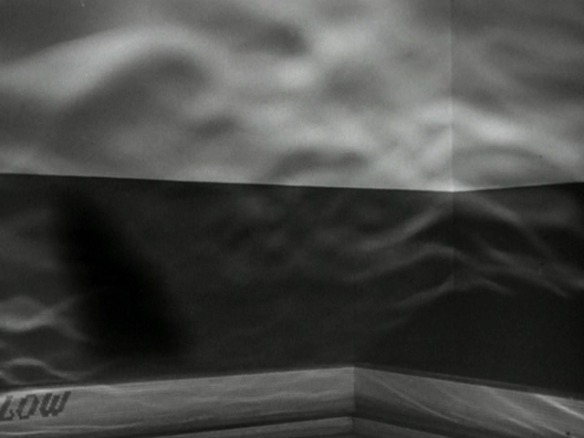 The use of dark patches is not an entirely expressionistic device – the first time she takes Reed back to her apartment, she realises that she has forgotten to put the lights on (she finds comfort in the dark), and the shot where she undergoes hypnosis, and her face is isolated in a spotlight is shown to be not a visual representation of her psychological state, but a shot of a room with the lights off. The scare scene in the swimming pool is ended when Irena switches the lights on and dispels the shadows in an instant. Tourneur permits this oscillation between manipulated, expressive imagery and rationalised reality, perpetuating the spectator’s own hesitation in accepting that Irena’s condition might be a genuine curse.

Review at Noir of the Week.

Reviews and quotations at Celtoslavica. 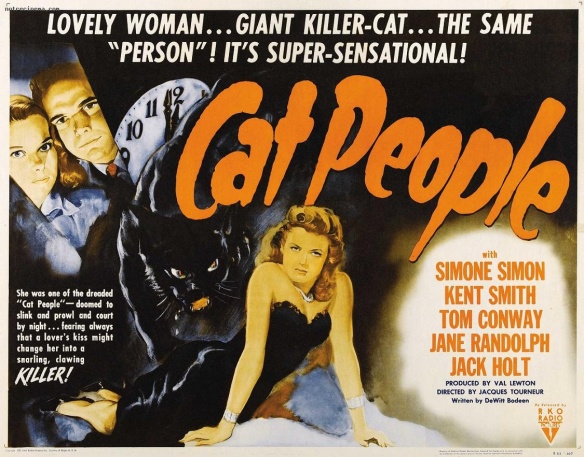