Since I started researching the topic of special effects for my PhD thesis, I’ve been interested in the interactions between stage magic and early cinema. The development of film as a mass cultural medium coincides strikingly with the decline of magic as a popular theatrical form, but magicians were amongst the first to fully exploit the cinematic apparatus as a tool for creating fantastic entertainment. Early film-makers often made records of music hall, vaudeville and carnival performers, perhaps because it made sense to turn the camera on people who were well-versed in the mechanics of addressing an audience and completing an action in an allotted time and on cue (so as not to waste precious film stock!). But it might also be that recordings of stage acts, often with direct gesticulation to the spectator, allowed the viewer to contemplate the distinctions between the recorded performance and the live original. Films such as the Lumière Brothers‘ L’Arrivée d’un Train a la Ciotat (1895), shot outdoors on a railway platform, with a train approaching from the background to the foreground, displayed the camera’s ability to embalm a fraction of time and drag it, pale and quiet into the theatre, providing the marvel of incongruity between the dark enclosure of the theatre and the bright spacious air of these distant locations. The aim was to reconstruct a sense of physical space extending beyond the borders of its two-dimensional canvas. When a magician takes to the stage, there is a promise that integrities of space will be disrupted, either by making something disappear, reappear or transform (whether it be an elephant, a coin, or “your card“). The thrill of seeing a magic trick performed live is reliant

upon the physical presence of the magician in a solid space, and the sense that, if we try hard enough, we can locate discrepancies in the performance that will reveal how it’s done; even though we know that it’s not really happening,  it is riveting to watch space being twisted: “Where did the card go? It was right there, and now I can’t see it – does it still exist? Did it ever? What kind of world is this where such a … oh, there it is; it was in his other hand all along. Cute.” This dynamic interaction between performer and observer, with the former attempting to divert the latter’s attention from the secret, would seem to be dependent on liveness and presence.

So, what is lost and gained when a magic trick is filmed? How do magic films compensate for the loss of liveness? First of all, there are two types of magic film – the first is when a trick is recorded “whole”, with a fixed camera and no camera tricks. See, for example, David Devant in The Egg-Laying Man, a brief record of one of the Egyptian Hall stalwart’s oldest tricks, plucking a succession of eggs from his own mouth. It’s a bit of sleight of hand, and while it’s clear that Devant is skilfully performing the illusion in real-time, he could easily have re-recorded it if something had gone wrong or if an ill-chosen camera angle had given away the secret at the first take.

The other kind of magic film is that which requires a filmic manipulation in order to effect the illusion. You can see these kinds of effects on profuse display in the films of Georges Méliès (see also my ever-expanding blog post about A Trip to the Moon). One film in particular, L‘Éscamotage d’une Dame chez Robert-Houdin (1896) illustrates so many of Méliès’ trick principles in such a succinct format that I can’t help returning to it again and again, and I like to use to illustrate . In this film, Méliès recreates for the camera one of the staples of his stage show at the Théâtre Robert-Houdin in Paris – the Vanishing Lady, a trick which, in this form, is usually attributed to French illusionist Buatier de Kolta. If you don’t want to know how this trick was done, look away now:

1. The magician places a newspaper on the floor of the stage.
2. On top of the paper, he puts a chair, and invites his female assistant to sit.
3. He drapes a sheet over the woman, hiding her completely from view.
4. He pulls away the sheet and … she’s gone!
5. He removes the chair and shows off the newspaper, still whole, to prove that nothing has passed through it.

Under the sheet is a wire frame that holds the woman’s shape while she disappears through a trapdoor in the stage – the newspaper is made of rubber, with a slit cut in the middle to allow the woman to pass through without tearing any paper. It’s easy when you know how.

For the film version, Méliès stages the trick in almost exactly the same way – he keeps the newspaper as “proof” that the stage is not gimmicked, but instead of disappearing his assistant through a trap-door, he effects the vanishing through a stop-action substitution. This trick is the cornerstone of Méliès’ special effects work, and I’m sure you’re familiar with how it works: by stopping the camera and re-arranging the scene before recommencing the shooting, the magician could give the impression of a continuous space in which instantaneous transformations occurred. 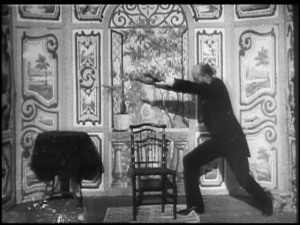 Actually, these effects were not necessarily done “in-camera” – splice marks on the film tell us that the transitions were finessed with some careful editing to ensure the greatest continuity between the separate actions. These may be amongst the earliest match-cuts, though they are matched not to draw comparisons between two separate spaces, but in order to preserve the integrity of the framespace. Even if spectators don’t notice the substitution that removes the assistant (Jeanne d’Alcy, whom Melies would eventually marry in 1926) from underneath the sheet, the next trick is far more obvious. Striking a pose with arms outstretched above the empty chair (the graphic matches of stop-motion substitutions are easier to effect if figures in the frame hold a posture across the change, but in later films he has refined this to an astonishing level of fluidity, and they are played so fast that they are often difficult to detect), the magician conjures instantaneously a grey skeleton. This is a game with death, life and the absolute control of the representational field offered by the cinematic apparatus, but what is striking here is how Melies has toyed with expectation. He has begun a trick in conventional style, suggesting that this is a simple record of a well-known trick, and then diverged to deliver a bit of conjuration that could only be achieved cinematically. 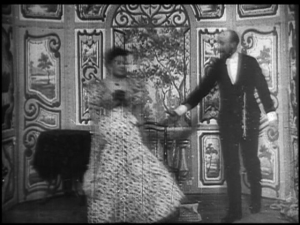 The aim seems to have been to preserve a sense of continuous space and time – the film is, after all, imitating the conventions of a stage performance (the newspaper, the bows to the audience etc.) – but this act of preservation is, I suggest, primarily so that Méliès can subvert expectations of how that space will act. The rest of Méliès’ trick films will take this principle to extremes, using frenzied repetition to create a markedly unstable filmic space in which any object can transmogrify, disappear or spring into life at any moment. Whatever the Lumière Brothers had done to show how their Cinématographe film camera (you can see one here) could extract fragments of time for the world and grant them a powerful sense of actuality, the use of stop-motion substitutions provided a powerful lesson in how malleable the filmed image really was, which should have been heeded as a sign of its limited status as ineffably objective proof of presence and actuality. This, I believe, is not just an exploratory theme of “primitive” cinema fidgeting with its new powers, but a fundamental facet of special effects, wherein a film-maker will take what you know about cinema and twist it, not so much that it will be incomprehensible, but just enough to play upon your expectations.