Not sure why I got “a bit peeved” this week by the surplus of “Rise of the…” movie titles going around. I guess we transfer our proper irritations onto trivial stuff:

What is that winds me up about these titles? Is it the pretentious overfamiliar self-importance that they imply (should I already know or care what Cobra, Lycans, Reeker and Leslie Vernon are?), with the scent of a grandiose origin story or character arc? Yeah, let’s stick with that as an explanation and move on to cooler stuff.

Bob Rehak over at Graphic Engine is talking about a viral video clip (originally broadcast as part of a Discovery Channel documentary) of planet Earth being obliterated by an asteroid. Bob notes the similarity between this clip and the Genesis sequence from Star Trek II, one of the first uses of CGI in a narrative feature film. Each is a flyby of planetary destruction or creation respectively, both allowing an awesome and impossible disembodied perspective on events that are usually just too big to take in. There seems to be a real desire, most persistently granted by Roland Emmerich (whose 2012 will again see him trashing the globe with giant tidal waves or some such), to imagine disaster from a distance, to take up the kind of omniscient perspective that we thought new media would create, instead of extra noise and confusion. Bob, in a particularly deft turn of phrase, calls the asteroid video “a peepshow of the gods”, noting that:

The clip is mercifully blind to the suffering of life on the ground (or for that matter in the air and sea); its only intimations of pain are displaced, oddly, onto architecture, with Big Ben and the Parthenon in flames.

Damn right. I guess it lets you imagine your own insignificance in the face of such cosmic ass-kickery, but it’s noteworthy how often the gravity of global annihilation is “felt” via the toppling of famous buildings.

Olly Moss is currently seeking full-time employment in graphic design or illustration. Go on, give him a job. He did these wonderful alternative movie posters: 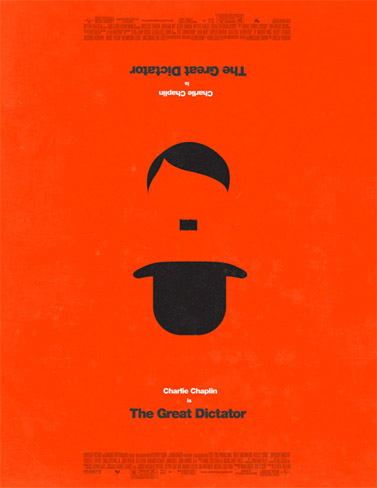 They probably work best for savvy viewers who already know the films and can summon up images or themes from the films from these minimalist graphic prompts. If you have a spare five minutes, there are far worse things you could do than check out the rest of Olly’s portfolio.

Those posters are a far cry from the cascade of unmitigated crap that you’ll find in the Criterion Forum‘s endlessly compelling threads that gather together the worst DVD covers ever. Once those highbrow Criterion types need a break from the Bela Tarr marathon, they seem to devote considerable energy on really, really bad cover art. I could fill up several blogs with this joyful celebration of irredeemable tat, but here’s a sample: 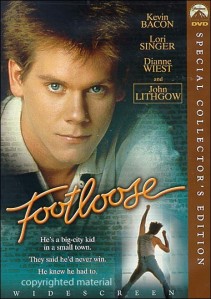 Apparently there are more comedy chimp movies than I was aware of.

With thanks to Film Studies for Free for the heads-up, Kim Louise Walden has written an excellent article on rotoscoping and how digital animation techniques might affect human performances and how we view them. More than a few of my students have found it deceptively tricky to write about Linklater’s Waking Life and A Scanner Darkly. They’re films that seem to yield a wealth of meaning through their distinctive form, but once you’ve noted that they are “a bit dreamlike”, you have to dig deeper to say anything substantial:

Rotoscoped animation is more akin to Bertolt Brecht’s “alienating effect” than Stanislaskian empathy, as the viewer is always aware of the layering effect and so are prevented from being immersed in the actors’ performances. Brecht advocated an approach to theatrical performance that sought to create a gap between the performance and the audience in order to distance the audience and thereby prompt the spectator to question the very nature of theatrical construction. I would assert that the processing of performance by rotoscoping technologies provides the required disruption to create a distance between text and spectator even though it is generated by the technologies of animation rather than the performers themselves.

I like it because I agree with it. I’m shallow like that. It chimes with my own thoughts on animation, special effects and performance, the ways in which imaging technologies divert dominant narratives with their own formal baggage, even when their allocated task might be to disappear in a puff of photoreal smoke.

Not long ago, I added a “podcasts” section to the ever-expanding list of links on this blog. I’m still on the lookout for great film-related podcasts, so any suggestions will be gratefully received. There are lots of amateur review sites where I’m reliably informed whether or not a movie “sucks” or “rocks”, but if there are any that offer interesting commentary or thoughtful discussion, I’d love to hear about it. I just discovered the pleasures of Old Time Radio (Mmm…. zeitgeist….). Want to listen to an old Batman serial from 1950? Hear episodes of the Bob Hope show? Right now, Boris Karloff is reading me the story of Chung Ling Soo. 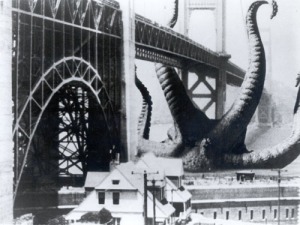 This is quite an old article, but you shouldn’t miss out on Michael C. LaBarbera’s deft destruction of all my childhood nightmares. A professor of organismal biology and anatomy at the University of Chicago, he demonstrates that a giant octopus could never pull down the Golden Gate Bridge without busting some serious guts, hence the ease with which the big lug can be dispatched:

The evidence clearly points to the poor cephalopod suffering a sudden and massive cerebral hemorrhage from this excess pressure just as it rips down the Golden Gate Bridge. The subsequent passivity of the giant octopus now makes perfect sense–its higher faculties were gone and the only responses it made were due to peripheral reflexes, grabbing the submarine in response to tactile stimulation, twitching when hit with the diver’s spear. Rather takes the edge off the human’s “heroic” actions at the end of the movie, doesn’t it?

If you don’t want to hear about Mothra’s battles with wind resistance, I suggest you give it a wide berth.

In case you’re not already fed up of hearing about how great There Will be Blood is (hey, it’s not a patch on Most Valuable Primate, but it’ll pass the time until my MVP boxset arrives…), check out Jason Sperb’s fine photo essay. It’ll illuminate the film for you in a matter of seconds. In Paul Thomas Anderson’s films, for example, “heads are constantly under siege”.

Edwin Mak at Faster than Instant Noodles (hey, that’s pretty fast!) has written a thoughtful post about global distribution and exhibition, considering the impact and influences of cinephilic communities and digital technology:

Since digital media destroyed traditional topologies of film distribution and exhibition, the film industry has––and still is––struggling to make sense of it all. And by the phrase make sense, what is merely hinted at is a world in itself stricken with familiar considerations.

Finally, wherever you stand on the “I hate/love Slumdog Millionaire” sliding scale (it generated goodwill and critical backlash with remarkable speed a couple of weeks back), you can’t ignore David Bordwell’s measured and constructive response:

The Slumdog project is an effort at crossover, and like all crossovers it can be criticized from either side. And it invites accusations of imperialism. A British director and writer use British and American money to make a film about Mumbai life. The film evokes popular Indian cinema in circumscribed ways. It gets a degree of worldwide theatrical circulation that few mainstream Indian films find. This last circumstance is unfair, I agree; I’ve long lamented that significant work from other nations is often ignored in mainstream US culture (and it’s one reason I do the sort of research I do). But I also believe that creators from one culture can do good work in portraying another one. No one protests that that Milos Forman and Roman Polanski, from Communist societies, made One Flew Over the Cuckoo’s Nest and Chinatown. No one sees anything intrinsically objectionable in the Pang brothers or Kitano Takeshi coming to America to make films. Most of us would have been happy had Kurosawa had a chance to make Runaway Train here. Conversely, Clint Eastwood receives praise for Letters from Iwo Jima.

Just as there is no single and correct “Indian” or “American” or “French” point of view on anything, we shouldn’t deny the possibility that outsiders can present a useful perspective on a culture. This doesn’t make Slumdog automatically a good film. It simply suggests that we shouldn’t dismiss it based on easy labels or the passports of its creators.

11 thoughts on “Rise of the Random Round-Up”