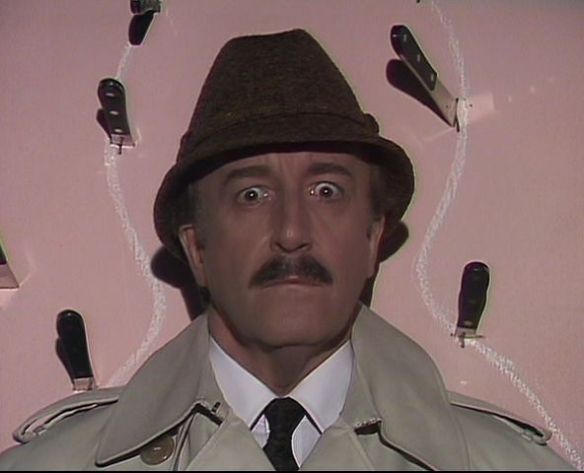 Let’s face it. The Muppet Show is not as funny as I remembered it being. It is less anarchic, frenetic and witty than I remember it, and the limp gags that may or may not be a deliberate parody of stale variety acts are just a little flat. Actually, I don’t remember laughing at it a lot when I was a kid, but I was fascinated by the solid colours, the endless stream of distinctive characters, and the sheer joy of not knowing what was coming next. I was scared of Uncle Deadly, and felt a wrenching sadness for the fate of the perpetually abused lab rat Beaker. I fancied Janice a bit, and wanted Fozzie Bear to be my friend, and Rowlf to be my uncle. I still have some of the songs etched on my brain. It was the best thing on TV when Batman wasn’t on. Watching it again in one of those “I-guess-I-could-call-it-research” moments, I don’t feel nostalgic – it’s too distant for that – but it is interesting to note what I missed first time round. With the possible exception of the Star Wars cast,  I had no idea who the star guests were. Now that I’m more familiar with the cultural icons of previous generations as well my own, it’s a pleasure to see the shows’s diverse guest list, including Gene Kelly, Raquel Welch, Liberace, Ethel Merman, Edgar Bergen, Carol Burnett, Gilda Radner, George Burns and, in particular, Steve Martin, who more or less carries the show on his wild and crazy shoulders. But let’s raise a toast to Peter Sellers, whose episode has a rather sinister glint in its eye. 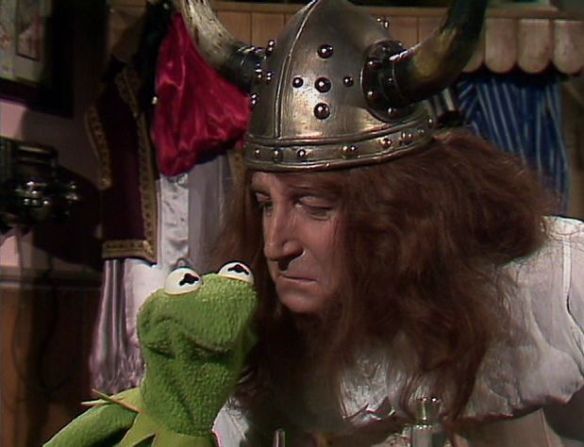 Aside from grudging admiration of his comic talents, it’s hard to find anyone to say a nice word about Peter Sellers. Spike Milligan, writer of The Goon Show, described him as “psychiatrically cruel”, which is impossible to interpret as any kind of back-handed compliment. Alec Guinness said he observed Sellers taking a tape measure to the stars’ trailers on Murder by Death to make sure that his was the biggest. His son Michael recalled being woken in the night, aged 7, so that his father, madly in love with Sophia Loren, could ask him: “Do you think I should divorce your mummy?” Stories of Sellers’ obsessive role-playing are well-documented. Even Anthony Haas, a friend and defender of Sellers, who refused to collaborate with Roger Lewis’s biography and the film based on it, happily reported that the comedian married Miranda Quarry in 1970 “in the character of an English aristocrat“. Sellers’ appearance with the Muppets doesn’t buck this trend. Refusing to slip out of character (though he switches between characters, each with a comedy accent thicker than the last, with alarming regularity), he plays instead a preening, Shakespearean thesp version of himself. Caught out by Kermit in the dressing room while rehearsing his new chicken-squeezing act in a Viking suit while reciting Richard III’s opening monologue, he confides to the frog compere that “there used to be a me, but I had it surgically removed”. Brian Henson (son of Jim) cheerily informs us:

A very funny story about this episode is Peter basically said he wants to do anything on the show except for one piece. It was a piece called The Wall where Kermit would interview the guest star for 30 seconds just about themselves. Peter said, “I can’t do that, I can’t be myself. Ask me to do anything but don’t ask me to be myself. I’ll be Queen Victoria but I don’t know how to be me.”

That’s a funny story? Sounds a little tragic to me, and reminiscent of his role in Being There, as a gardener whose personality has been wiped clean by decades of TV and unquestioning, dutiful service. It’s also a sollipsistic line peddled by the HBO/BBC biopic The Life and Death of Peter Sellers, notable only for Geoffrey Rush’s amazing impersonation. But let’s not invoke the cliché of the tearful clown as an excuse. Is anybody asked to “be themselves” on The Muppet Show? Certainly it must be difficult to act natural when you’re being interviewed by a frog. Steve Martin seemed to fit in quite nicely with the farmyard singalongs, but his comic persona was always a full-blown characterisation rather than a projection of his true self. It’s probably even the case that most of the fun with the guests came from watching how they would react when faced with a carnival of fuzzy animals. So, there was really no need for Sellers to remark that he didn’t want to be himself: it was barely expected, and it’s usually the case that guests retreat into the comfort of ostentation as soon as they’re surrounded by a puppet-fest. The high-wire comedy of identity crisis was all part of the schtick that gave Sellers’ work a compelling edge.

Sellers ups the ante with a rather unnerving sequence in which he plays a Hitlerian physiotherapist who turns a simple sports massage into a systematic, limb-twisting bit of sadistic pig torture. Yes, really:

It looks improvised, and although Link the pig later reports that “Peter O’Toole” gives the best massage ever, it’s a little grotesque. But perhaps that’s just an adult perspective. Maybe a kid could enjoy the surreal slapstick of it without thinking of concentration camp experiments. The comic Nazi motif that Sellers enjoyed so much (see Dr. Strangelove and his admittedly hilarious cover version of The Beatles ‘She Loves You’, always worth reviving) recurs at the curtain call. Nasty. Nice.

4 thoughts on ““There used to be a me”: Peter Sellers on the Muppet Show”